Last semester, I was looking through a graded midterm I had received back when I realized that my professor had added up my total points incorrectly, leaving me with an 82 instead of a 92. I turned and marched back into the classroom to demand my points back.

I approached my graduate student instructor and asked in a small voice, “Could you help me count this again?”

“Sure,” he said, and pulled out his phone to add up the numbers. He poked at it for a while, so I said, “I think it’s supposed to be 92.” For some reason, I felt uncomfortable hearing myself add I think in front of my sentence when I was sure I was right. Eventually, my GSI said “You’re right, good catch. That’s a big point difference.”

“Yeah,” I said, “it’s about ten points.” I cringed upon hearing myself say about.

Overall, it was a positive encounter. My GSI fixed my score, and I left with a chirpy “thank you” and ten points back on my midterm. But as I walked away, I wondered why unassertive language such as “I think” and “about” slipped into my sentences so often. Could I not trust my mental math capabilities? Was I so wary of being wrong that I couldn’t flat out say “It’s a ten point difference?”

My soft voice and equivocal language not only revealed that I was nervous around authority figures, but also helped me avoid taking responsibility for my thoughts. I also noticed the “maybes” and “perhaps” everywhere in my writing. If I added “I think” in front of all my sentences, no one could blame me for being wrong because I was merely speculating. But for a ridiculous moment, I imagined myself in the courtroom as a lawyer, confronting an opponent with “I think I object!”

I’m glad I noticed which unwelcome phrases were popping up in my everyday speech. Unassertive words are everywhere in our use of language if we pay close enough attention. They make us sound less confident and less correct. Being assertive is a gamble, since the more adamantly we stand by our argument, the bigger fool we seem if we turn out to be wrong. But on the flip side, our truths are only strong if we stand behind them. So I’m going to be brave and take responsibility for my truths by eliminating unassertive language … I think! 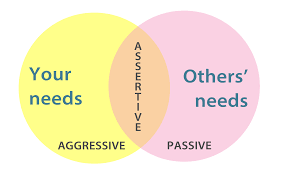